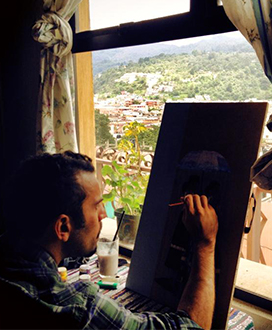 Nico is a web designer turned developer for the Seattle Colleges North Campus. While attending Western Washington University's School of Art he formed a solid base to build his career. Nico holds a BFA in Graphic Design with an emphasis on New Media (web and video), which was a brand-new program at the time. Through the years, he has morphed into a web developer who also uses his new media skills in his everyday work and home life. “If I don’t have photoshop open at work mocking up web layouts or designing a flyer for digital signage, I’m at home digitally prepping my fine art,” he says. “The digital arts have such a broad range usage it can be translated through work or home. I'd like to pass on those skills.”