Get into the Rhythm of Speaking with an American Accent 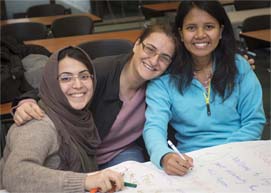 From a young age, Speaking with an American Accent instructor Nicole Kaup has harbored a love for discovering new languages and experiencing other cultures. After attaining degrees in Spanish, she taught college level Spanish courses before moving on to teach ESL. In addition, she holds language instructor certification in Teaching English to Speakers of Other Languages (TESOL). “In 2012, I received several questions about accent reduction training,” she says. “Based on this need, I took some courses to train to be an accent coach and read a lot of books.  I started doing workshops at the college and university I taught at, then started taking private students and doing some workplace trainings.”

As a result, Kaup now works exclusively in the area of accent reduction and oral English skills improvement.  “I teach private individuals, group classes, and in workplaces,” she says. “I’ve created several online courses and have a YouTube Channel full of videos to help people improve their American English pronunciation.”

Kaup speaks two languages (English and Spanish) fluently and has a working familiarity with at least half a dozen more. She says an understanding of how our languages differ is of great advantage in her work as it allows her to predict where a student might face certain challenges depending on their cultural background. “Although it’s helpful to have knowledge of other languages, speakers are all individuals with different strengths and weaknesses, so it’s important to hear their English speech before arriving at conclusions,” she says. “And because English has some specific things that are unusual, there are many things that just about all non-native speakers struggle with, which makes it possible to conduct classes with people from any language background.  They all benefit from similar instruction, since most have similar issues regardless of their native language.” 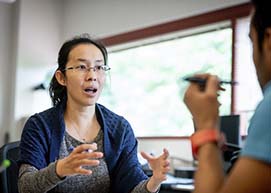 According to Kaup, each language has its own unique rhythm that helps one identify it without comprehending the meaning behind the words. “For example, if you hear someone speaking French, you can identify it as French even if you don’t understand what they’re saying,” she says.  “In addition, the sounds that are used most, especially those that don’t exist in one’s native language, will stand out to the listener.”

In addition, native English speakers are often oblivious to the musicality of their own language—a touchstone for anyone seeking to master the accent. “English is often described as a wave,” says Kaup. “It goes up and down in a rhythmic pattern.  It sounds smooth, as we link our words together.  American English in particular has a very high frequency of ‘R’ sounds, so people who don’t speak English may describe it in funny ways, like that it sounds like dogs growling.  There are also a lot of word endings sounds like ‘S’ and ‘Z’, and lots of ‘Sh’ and similar sounds. I’ve heard someone mention that it sounds like snakes hissing.  This is valuable information for those seeking to master the accent. Those are the areas to focus more attention on, since they are important in creating the characteristic sound of English.”

Kaup says most people looking to improve their pronunciation often create obstacles for themselves when they focus exclusively on sounds they have trouble pronouncing, and overlook the importance of overall rhythm and melody in English communication.  “Applying the stress pattern of English is usually a big challenge.  Mastering the rhythm of the language that is quite different from their native language takes lots of practice,” she says. “It’s important to learn to not equally stress all syllables and all words, and to emphasize the stressed parts, while reducing the unstressed ones.  And the same with sentence rhythm – emphasizing the important words, while reducing and connecting the less important words.”

Hard as it is to admit, patience is not always offered to non-native speakers, and a lack of facility with the language can prove to be a detriment. “People are always being judged on many things in life, including appearance, speech, clothing, etc.,” says Kaup. “For example, accented individuals may lose out on job opportunities because they are difficult to understand or because they are perceived as being less intelligent, less competent or not having the necessary skills to do the job. This is not to say that having an accent is bad. The goal should not be to sound like an American, but to be able to express yourself clearly, so everyone understands what you have to say. If your pronunciation is too distinct from the standard, communication may be hindered. And if you are unable to express yourself, it limits your ability to contribute.” 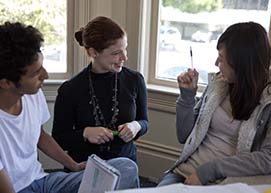 This speaks to the great value of a course like Speaking with an American Accent. “There is nothing superior about an American accent,” says Kaup. “American English is just the language of work and school and other things where we happen to live, so it’s helpful to speak it to be able to fully participate in life here.  Some other benefits to studying the American accent are generally that non-native speakers understand Americans better when they speak, and that they feel more confident in their speech, knowing that others will understand them.”

There are no hard and fast rules to master an American accent, other than willingness to practice. “It’s just acquiring a new skill,” says Kaup. “And in mastering any new skill, it’s helpful to have some tools.  First of all, you need to have a strong motivation to want to acquire the new skill.  Without that, people usually give up when they realize it requires continuous practice. It’s a good idea to have a guide of some sort and a plan, so you know what and how to improve.”

There are numerous ways to tackle the challenge, but not all approaches work for everyone.  “You could take a course, hire a coach, buy a book, purchase an app, so you know what’s important to focus on to improve your skill,” says Kaup. “Changing your speech is not easy.  It requires practice just like in learning any new skill.  If you want to learn to play tennis, your coach shows you how to swing, but you have to go out and do it again and again to master it yourself. The same happens if you want to learn to play piano.  Your teacher explains how the instrument works and about the different notes and how to read music, but to master it, you need consistent practice to develop the muscle memory and make your new knowledge and skills a habit.”

Kaup says students joining Speaking with an American Accent can look forward to learning what elements of English speech are most important to focus on to speak clear English. “They will gain an awareness of the rhythm and melody of American English and how to incorporate it into their speech.  They will learn key vowel and consonant sounds to focus on to develop clear American English speech.  They will learn how to practice in an efficient way to be able to improve their speech on their own.

Learn more about Speaking with an American Accent.