Mount St Helens and How it Shaped Our Lives 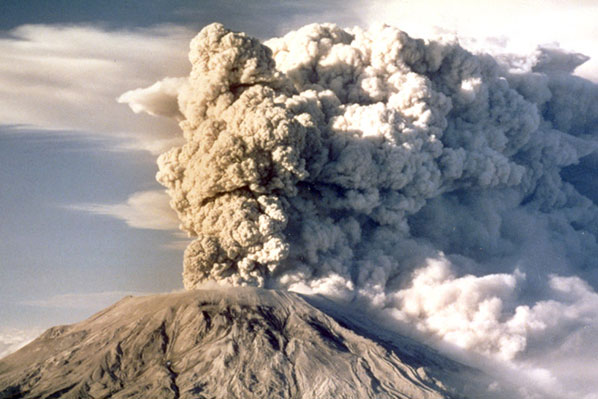 Mount St Helens’ eruption had a significant impact on hearts and minds across the Pacific Northwest and beyond. Those of us who were alive at the time have a very clear recollection of where we were on May 18, 1980. This was particularly true of Explore Mount St Helens instructor Cary Easterday. “I was a young primary school student in Maryland at the time,” Easterday recalls. “I heard about the eruption in the news, and I was fascinated by the photographs and news reports.” However, the news on that fateful day was not Easterday’s introduction to the geologic life of Mount St Helens (MSH). “I first heard about MSH in 1980 before the May 18 eruption. Geologists were predicting a major eruption and it was very exciting (and scary) to imagine what would happen.”

The excitement and fear the mountain instilled in Easterday did not abate with age, it only increased, in part inspiring him to pursue a  Master’s Degree in Geology and a lifelong fascination with rocks and fossils. Easterday went on to teach at such illustrious institutions as the Smithsonian Institution, The Chicago Field Museum, University of Washington, The Ohio State University and the Burke Museum. 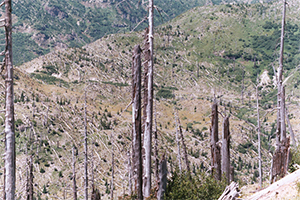 In geologic definitions, MSH is a stratovolcano, also known as a composite cone. “MSH is of the category of volcanoes that have inspired people with beauty, fear, poetry, song, and awe for millennia,” says Easterday. “Stratovolcanoes are generally giant triangle-shaped features with periodic violent eruptions.  Most volcanoes that people know by name are stratovolcanoes, including Fuji, Rainier, Kilimanjaro, Etna, Vesuvius, Pinatubo, and Krakatoa.”

Young stratovolcanoes like MSH grow with cyclic eruptions, demonstrated by the devastating blast of 1980 that destroyed hundreds of acres of timberland, deposited over 540 million tons of ash across the countryside and left 57 dead.

According to Easterday, MSH is the youngest of all Washington state Cascade volcanoes at approximately 40,000 years old. “Stratovolcanoes form at plate boundaries where an ocean floor (plate) slips underneath a continent,” says Easterday. “As the ocean floor (plate) sinks, it heats up, and melts into magma. The magma rises through the overlying continent to the surface and forms stratovolcanoes. In Washington State, we have small ocean plates (Juan de Fuca, Explorer and Gorda) colliding with North America and sliding underneath us. This is why our region has so many earthquakes and volcanoes.”

Easterday’s fascination with geology is infectious and his love of the subject matter is obvious from the fine detail of his knowledge. “If you could slice MSH like a cake, you would see alternating layers of lava and tephra (i.e., broken up pieces of rocks and ash).  The May 18, 1980 eruption was just one of many MSH eruptions in the past 40,000 years.  MSH is the most active Cascade volcano in Washington State during the past 10,000 years”

Needless to say, the 1980 eruption not only blew the picturesque peak apart, it reformed the entire mountain’s shape—a shape that, in time, will return. “MSH lost approximately 1,300 feet off the top of the mountain on May 18, 1980, but a small volcanic cone has been quietly growing upwards inside the heart of MSH crater ever since,” says Easterday. “On many days, MSH visitors can see steam rising from the top of the volcanic cone.  Yes, MSH will be a big, beautiful triangle shape again one day and erupt just as it did in 1980!  This eruption-regrow cycle is the ‘circle of life’ for stratovolcanoes.”

Images released following the 1980 blast show the large forests surrounding the northern side of the mountain completely flattened. It was much more difficult for the humans living near the mountain to recover than for the mountain itself. “Many of those tree trunks have been removed, but several have been left in place by the park service as a poignant reminder of May 18, 1980,” says Easterday. “The tree trunks point directly away from the MSH crater.” 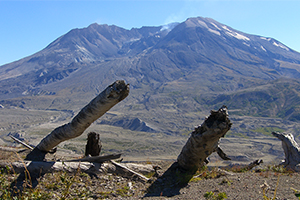 asterday looks forward to sharing his vast knowledge of MSH geology, not to mention the myth and lore of the mountain with his students. “We’ll discuss the geological story and some Native American mythology about MSH. Students frequently discuss personal stories of the May 18, 1980 event - either firsthand or from relatives/friends who experienced it.  I had one student who was a pilot that flew very near MSH on May 17, 1980!!”

Students can also look forward to learning how the eruption affected those whose lives centered on the mountain. “Visiting Johnston Ridge Observatory is always an emotional experience for me,” he says. “I took geology classes at UW with professors who also taught Dave Johnston in graduate school, whom the Observatory is named after.”

David A. Johnston was a US Geological Survey (USGS) volcanologist killed in the 1980 eruption. A key contributor to the MSH monitoring team, Johnston remained at his post six miles from the volcano until the very end. He was the first to report the eruption, transmitting, "Vancouver! Vancouver! This is it!" Johnston was never heard from again and his body was never found. “My professors would fondly share stories about Dave’s enthusiasm and clever ideas when he was studying volcanoes, but they would ultimately ‘tear up’ when discussing the events of May 18, 1980.” The information Johnston shared with the world and the sacrifice he made will not soon be forgotten.

For Easterday, Geology and the story of MSH are all part of a wonderful adventure—an adventure he looks forward to sharing with students as well as hearing anecdotes about their personal history with the mountain.