Pondering the Temples of Angkor Wat 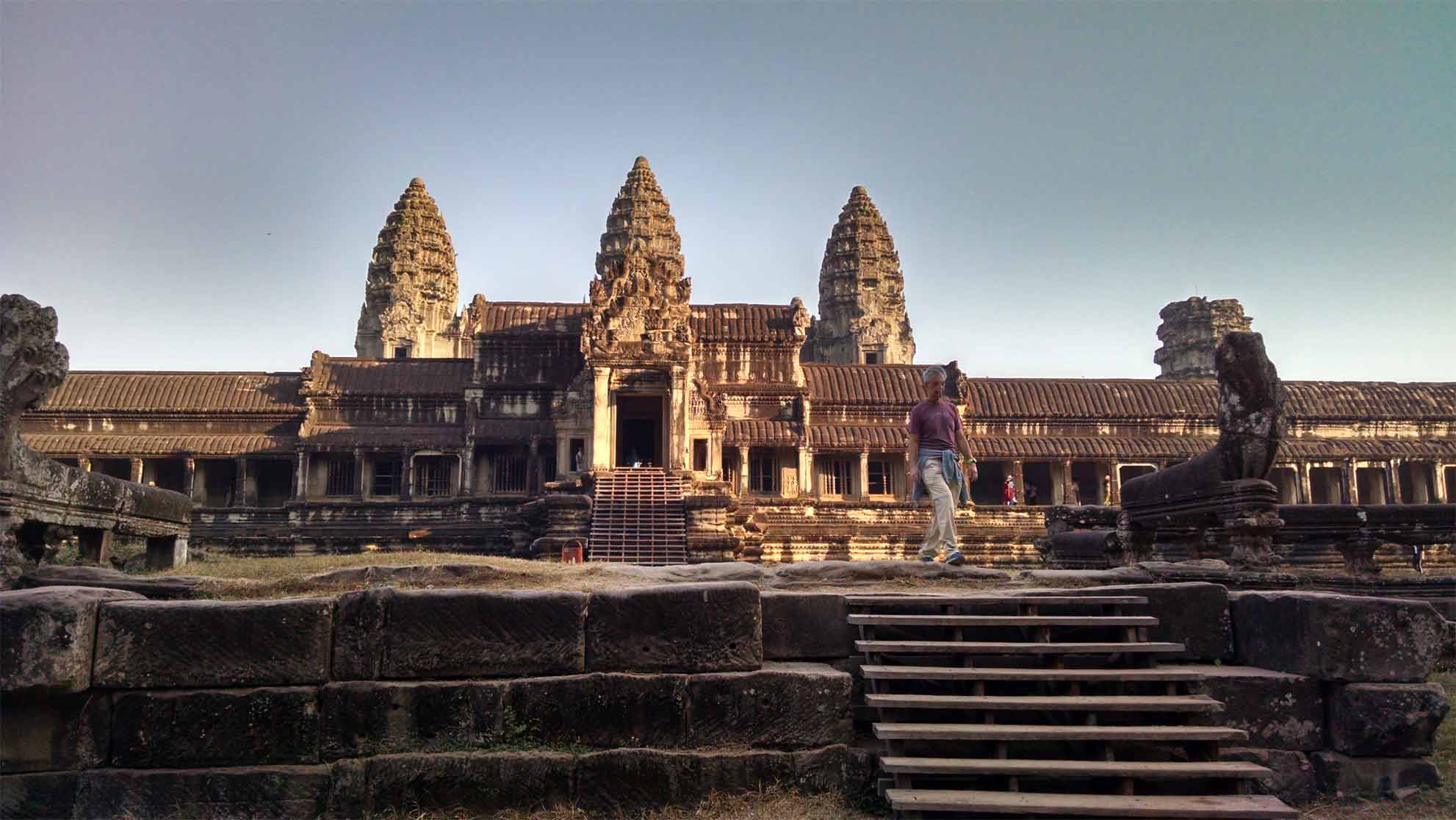 Yoga for Everyone instructor Tara Bernstein recently took a trip to Cambodia. We asked her to share how the experience informed her personal exploration of yoga as an instructor and practitioner.

I recently visited several beautiful Cambodian temples including Angkor Wat, a place dedicated to Vishnu the protector that covered 248 square miles. The canals and moats surrounding the site are original, highlighting an advanced hydraulic mechanism for the period that was designed to create a protective barrier for the Temple of the Gods.  Interestingly many of these temples are Hindu.  Engravings on the temple walls depict scenes from the Ramayana, the Mahabharata and include the story of “The Churning of the Ocean of Milk” which represents an ancient creation story. 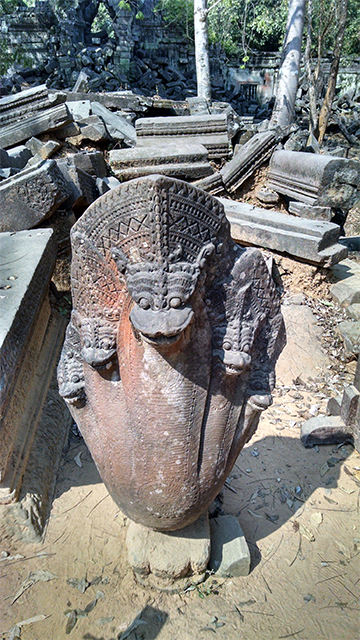 On other temple walls, religious scenes are depicted in high relief giving the images a three-dimensional feel. Some temples have one-to-five smaller towers called prasadam (offerings to the Gods) and larger versions called Wat-Temple. The temples are pyramid structures, or made of stacked boulders connected in a tongue and groove model. There are Sanskrit engravings which define the honored deities represented in the temple as well as the king who was responsible for its construction. The temples can be very large, like Angkor Wat, and built for connecting earth to the heavens through the alignment of its spires in relation to the planets. The temple architecture resembles that of a mandala and was designed to be in harmony with the universe, the rising sun and moon cycles.

The temples were constructed with numerous towers to mimic the sacred mountain ranges, such as the Himalayas, to depict the sacred home of the Gods. Other temples contain just one tower and are located in the woods.  Some temples are Buddhist, others are Hindu and some are both depending on what faith the ruling kings of the day followed.

Built between 900 and 1400AD these temples are around 900 years old.  The engravings include apsaras, or female spirits of the clouds and waters, depicted as dancers, concubines, and celestial women. These images acted as seductive tests to measure the strength of devotion in the faithful. Images of the Naga snake, a temple guardian, are found lining the entrance or engraved along with other animals associated with certain gods including the ox, turtle, lion, elephant, and monkey.  Temples have engraved scenes representing the daily lives of local people that includes imagery of cockfights, sumo wrestlers, the circus and boarding houses.

The local indigenous people who live within the boundaries of the temple village practice traditional medicine and there are plants used for healing found within the temple complex. 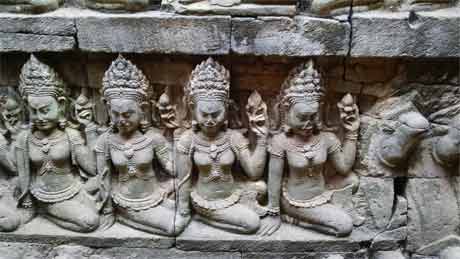 Seeing these temple reliefs reminded me of the great Indian epics lying around on my bookshelves collecting dust. Pulling them off the shelf, I rediscovered the stories that I saw engraved on the temple walls. I learned that experiencing these temples was like a backdrop to an epic tale’s environment, and being built 100 years after these stories were first told, made my pilgrimage to Cambodia all the more significant.  I had taken a similar path to those written into the epics. Yoginis and spiritual seekers made their own pilgrimages up the mountains, into the woods and through the sacred rivers in pursuit of ritualistic cleansing.

Yoga is not just about asanas or poses, yoga is part of the culture of Hinduism. The temple engravings from these Indian epic stories touch upon the symbolic and philosophical stories of humanity.  Deep-rooted psychological themes such as good and evil, power and prejudice are timeless and resonate in all of us. Let’s take a pilgrimage to our Yoga mats. The next time we practice a pose, ponder the deeper meaning of why we put ourselves into poses named camel, frog, snake, or crocodile. Ponder the millions of laborers, with the help of animals, who piled boulders upon rock, and who carved each figure by hand into the stone.  Let’s keep our own asana practice similar to their physical offering.

Learn more about Yoga for Everyone.