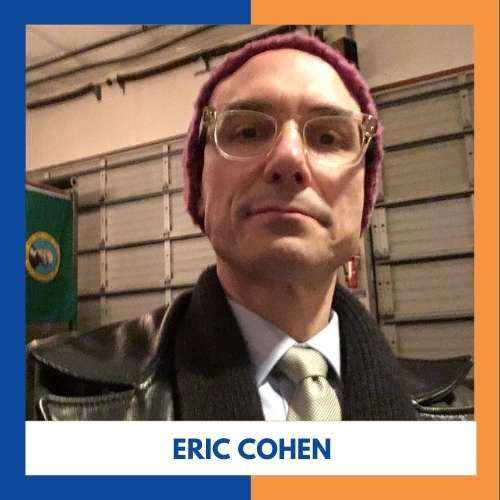 Ever since the early 70’s when he was young boy watching “Creature Feature” every Saturday afternoon on Channel 56 (WLVI) in New Hampshire, Cohen has been a diehard fan of science fiction cinema, preoccupied by everything Godzilla, Rod Sterling, Shatner, Hammer Films and inept budget masterpieces like The Brain that Wouldn’t Die. An acolyte of “Professor” Fred Hopkins, whose NSC Schlock Cinema class he attended consistently from 2009 until its untimely demise in the spring of 2020, Cohen runs a film club that has convened monthly for the last six years to screen a wide range of psychotronic gems such as Planet of the Vampires and Donovan’s Brain. Together with co-instructor Mark Daniels, Cohen also hosts online Flying Saucer Cinema film discussion groups in partnership with Seattle’s Scarecrow Video, the world's largest video archive. When not exploring the bizzarro demimonde of monster and spaceship cinema, he spends his time leading a team of educators at Mercer Education, the school in Bellevue he founded and directs. Cohen, who lives in Seattle, brings to this project unbridled enthusiasm as well as years of teaching experience.